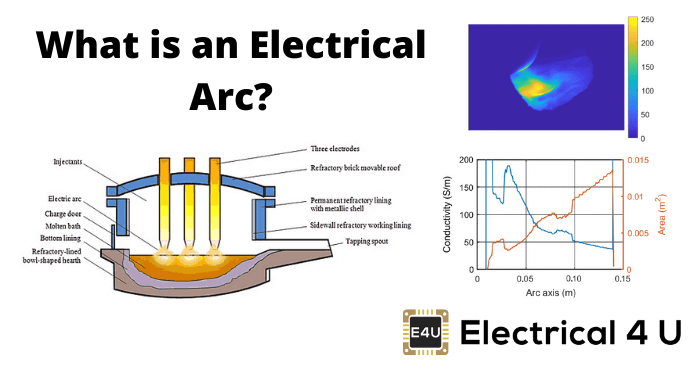 Before going through details of arc quenching or arc extinction technologies employed in circuit breaker we should know first what is arc actually.

What is an Arc?

During opening of current carrying contacts in a circuit breaker the medium in between opening contacts become highly ionized through which the interrupting current gets low resistive path and continues to flow through this path even the contacts are physically separated. During the flowing of current from one contact to other the path becomes so heated that it glows. This is called arc.

There are numbers of free electrons and ions present in a gas at room temperature due to ultraviolet rays, cosmic rays and radioactivity of the earth. These free electrons and ions are so few in number that they are insufficient to sustain conduction of electricity. The gas molecules move randomly at room temperature. It is found an air molecule at a temperature of 300oK (Room temperature) moves randomly with an approximate average velocity of 500 meters/second and collides other molecules at a rate of 1010 times/second.

These randomly moving molecules collide with each other in very frequent manner but the kinetic energy of the molecules is not sufficient to extract an electron from atoms of the molecules. If the temperature is increased the air will be heated up and consequently the velocity of the molecules will be increased. Higher velocity means higher impact during inter molecular collision. During this situation some of the molecules are disassociated in to atoms. If temperature of the air is further increased many atoms are deprived of valence electrons and make the gas ionized. Then this ionized gas can conduct electricity because of sufficient free electrons. This condition of any gas or air is called plasma. This phenomenon is called thermal ionization of gas.

Ionization due to Electron Collision

As we discussed that there are always some free electrons and ions presents in the air or gas but they are insufficient to conduct electricity. Whenever these free electrons come across a strong electric field, these are directed towards higher potential points in the field and acquire sufficiently high velocity. In other words, the electrons are accelerated along the direction of the electric field due to high potential gradient. During their travel these electrons collide with other atoms and molecules of the air or gas and extract valance electrons from their orbits.

Role of Arc in Circuit Breaker

When two current contacts just open an arc bridges the contact gap through which the current gets a low resistive path to flow so there will not be any sudden interruption of current. As there is no sudden and abrupt change in current during opening of the contacts, there will not be any abnormal switching over voltage in the system. If i is the current flows through the contacts just before they open, L is the system inductance, switching over voltage during opening of contacts, may be expressed as V = L.(di/dt) where di/dt rate of change of current with respect to time during opening of the contacts. In the case of alternating current arc is monetarily extinguished at every current zero. After crossing every current zero the media between separated contacts gets ionized again during next cycle of current and the arc in circuit breaker is reestablished. To make the interruption complete and successful, this re-ionization in between separated contacts to be prevented after a current zero.

If arc in circuit breaker is absent during opening of current carrying contacts, there would be sudden and abrupt interruption of current which will cause a huge switching over voltage sufficient to severely stress the insulation of the system. On the other hand, the arc provides a gradual but quick, transition from the current carrying to the current breaking states of the contacts.

So from above explanation we can say that ionization process of gas depends upon nature of gas (heavier or lighter gas particles), pressure of gas and temperature of gas. As we said earlier the intensity of arc column depend up on the presence of ionized media between separated electrical contacts, hence, special attention should be given in reducing ionization or increasing deionization of media between contacts. That is why the main designing feature of circuit breaker is to provide different pressure control methods, cooling methods for different arc media in between circuit breaker contacts.

Heat loss from an Arc

Heat loss from an arc in circuit breaker is takes place through conduction, convection as well as radiation. In circuit breaker with plain break arc in oil, arc in chutes or narrow slots nearly all the heat loss due to conduction. In air blast circuit breaker or in breaker where a gas flow is present between the electrical contacts, the heat loss of arc plasma occurs due to convection process. At normal pressure the radiation is not a significant factor but at higher pressure the radiation may become a very important factor of heat dissipation from arc plasma. During opening of electrical contacts, the arc in circuit breaker is produced and it is extinguished at every zero crossing of the current and then it is again reestablished during next cycle. The final arc extinction or arc quenching in circuit breaker is achieved by rapid increase of the dielectric strength in the medium between the contacts so that reestablishment of arc after zero crossing cannot be possible. This rapid increase of dielectric strength in between circuit breaker contacts is achieved either by deionization of gas in the arc media or by replacing ionized gas by cool and fresh gas.
There are various deionization processes applied for arc extinction in circuit breaker, let us discussed in brief.

Deionization of Gas due to Increasing Pressure

Deionization of Gas due to Decreasing Temperature

The rate of ionization of gas depends upon the intensity of impact during collision of gas particles. The intensity of impact during collision of particles again depends upon velocity of random motions of the particles. This random motion of a particle and its velocity increases with increase of temperature of the gas. Hence it can be concluded like that if temperature of a gas is increased; its ionization process is increased and opposite statement is also true that is if the temperature is decreased the rate of ionization of gas is decreased means deionization of gas is increased. Therefore more voltage required to maintain arc plasma with a decreased temperature. Finally it can be said that the cooling effectively increases the resistance of the arc.
Different types of circuit breakers employ different cooling techniques which we will discuss later in the course of circuit breakers.