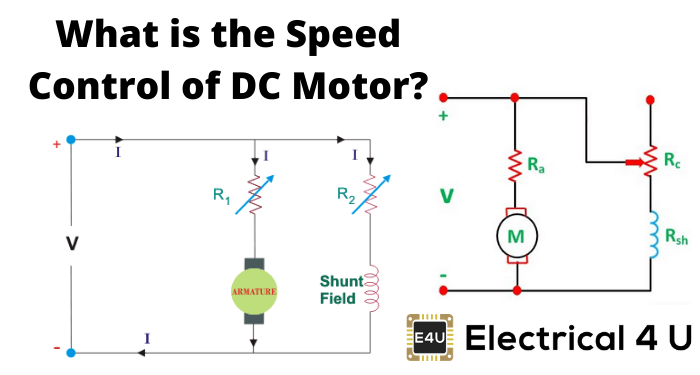 Often we want to control the speed of a DC motor on demand. This intentional change of drive speed is known as speed control of a DC motor.

Speed control of a DC motor is either done manually by the operator or by means of an automatic control device. This is different to speed regulation – where the speed is trying to be maintained (or ‘regulated’) against the natural change in speed due to a change in the load on the shaft.

The speed of a DC motor (N) is equal to:

Therefore speed of the 3 types of DC motors – shunt, series and compound – can be controlled by changing the quantities on the right-hand side of the equation above.

Hence the speed can be varied by changing:

Terminal voltage and external resistance involve a change that affects the armature circuit, while flux involves a change in the magnetic field. Therefore speed control of DC motor can be classified into:

We will discuss how both of these methods control the speed of DC series motors and DC shunt motors.

Speed control methods for a DC series motor can be classified as:

Speed adjustment of a DC series motor by armature control may be done by:

This is the most common method employed. Here the controlling resistance is connected directly in series with the supply of the motor as shown in the fig.

The power loss in the control resistance of DC series motor can be neglected because this control method is utilized for a large portion of time for reducing the speed under light load condition. This method of speed control is most economical for constant torque. This method of speed control is employed for DC series motor driving cranes, hoists, trains etc.

The speed control of DC series motor can be accomplished by supplying the power to the motor from a separate variable voltage supply. This method involves high cost so it rarely used.

Speed adjustment of a DC series motor by field control may be done by:

This method uses a diverter. Here the field flux can be reduced by shunting a portion of motor current around the series field. Lesser the diverter resistance less is the field current, less flux therefore more speed. This method gives speed above normal and the method is used in electric drives in which speed should rise sharply as soon as load is decreased.

This is another method of increasing the speed by reducing the flux and it is done by lowering number of turns of field winding through which current flows. In this method a number of tapping from field winding are brought outside. This method is employed in electric traction.

The classification of speed control methods for a DC shunt motor are similar to those of a DC series motor. These two methods are:

In armature resistance control a variable resistance is added to the armature circuit. Field is directly connected across the supply so flux is not changed due to variation of series resistance. This is applied for DC shunt motor. This method is used in printing press, cranes, hoists where speeds lower than rated is used for a short period only.

This method of speed control needs a variable source of voltage separated from the source supplying the field current. This method avoids disadvantages of poor speed regulation and low efficiency of armature-resistance control methods.

By this method a DC Shunt motor’s speed is controlled through a field rheostat.

In this method, speed variation is accomplished by means of a variable resistance inserted in series with the shunt field. An increase in controlling resistances reduces the field current with a reduction in flux and an increase in speed. This method of speed control is independent of load on the motor. Power wasted in controlling resistance is very less as field current is a small value. This method of speed control is also used in DC compound motor.

Static Ward Leonard drives are being used these days because of the drawbacks of the classical method. Rotating M-G sets are replaced by solid state converters to control DC motor speed. The converters used are choppers (in case of DC supply) or controlled rectifiers (in case of AC supply). This method is not suitable for intermittent loads.

To derive the speed of a DC motor, we start with the equation for the DC motor’s EMF (Electromagnetic Force). We know that the EMF equation of DC motor is equal to: