MOSFET which has become the most commonly used three terminal devices brings revolution in the world of electronic circuits. Without MOSFET, the design of integrated circuits seems impossible nowadays.

These are quite small and their process of manufacturing is very simple. The implementation of both analog and digital circuits integrated circuits is successfully done because of the characteristics of MOSFET, MOSFET circuits can be analyzed in two ways-large signal model small signal model.

The large signal model is nonlinear. It is used to solve for the de values of the device currents and voltage. The small signal model can be derived based on the linearization of large signal model. The cut-off region, the triode region and the saturation region these are the three regions of operation MOSFET. When gate to source voltage (VGS) is less than threshold voltage (Vtn), the device is in cut off region. When MOSFET is used as an amplifier, it is operated in saturation region. It is in triode or cut off region when it is used as a switch.

For helping MOSFET’s to maximize the turn on and turn off time, the driver circuits are needed. If the MOSFET takes relatively long time going in and out of conduction, then we cannot use the advantage of using MOSFETs. This will cause MOSFET to heat up and device will not function properly. MOSFET drivers can often use bootstrap’s circuit to create voltages to drive the gate to a higher voltage than the MOSFETs supply voltage.

Practically the gate of MOSFET acts like a capacitor to the driver, or the driver can turn on or off MOSFET very rapidly, by charging or discharging the gate respectively.

MOSFET works in three regions cut off region triode region and saturation region. When MOSFET is in cut off triode region, it can work as switch.

MOSFET switching circuits consists of two main part- MOSFET (works as per transistor) and the on/off control block. MOSFET passes the voltage supply to a specific load when the transistor is on. In most of the cases n-channel MOSFETs are preferred over p-channel MOSFETs for several advantages.

Inverter circuit is one of the fundamental building blocks in digital circuit design (not to be confused with a power inverter). The inverters can be applied directly to the design of logic gates and other more complex digital circuits. The transfer characteristics of an ideal inverter is shown below. Resistive load n-MOS inverters :
It is the simplest MOSFET inverter circuits, it has a load resistance R and n-MOS transistor connected in series between supply voltage and ground as shown below. 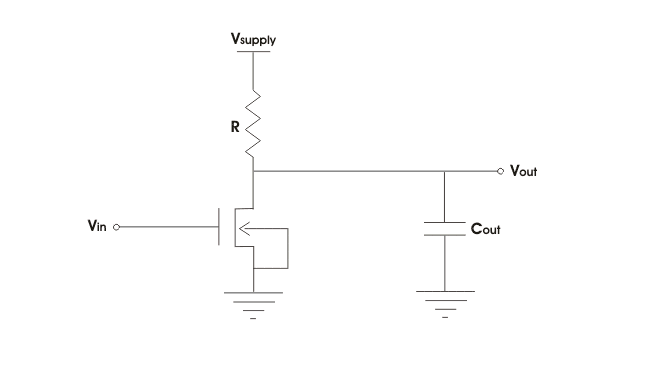 If Vin is less than the threshold voltage of the n- MOS the transistor is off. The capacitor can be changed to supply voltage and the output voltage equals to the supply voltage. When the input is greater than the threshold voltage of the transistor and we get zero voltage at output it’s disadvantages is that it occupies large area IC fabrication.

In the following circuit, we can see a pull up and pull down n MOSFET. The gate of the pull up is shorted to supply voltage to make it always on. 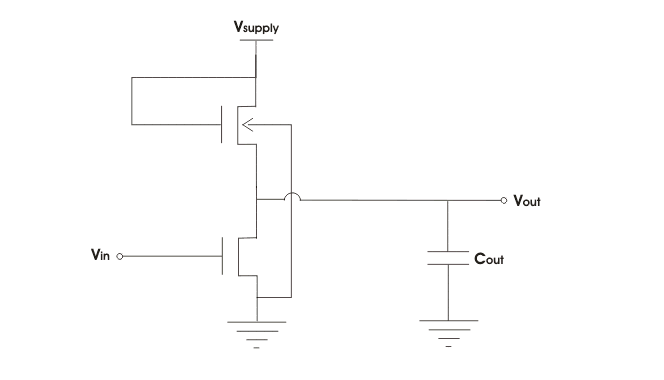 The advantages are CMOS inverters circuit dissipates power only during switching event and in the voltage transfer curve we observe sharp transition. But in fabrication extra process steps are required.