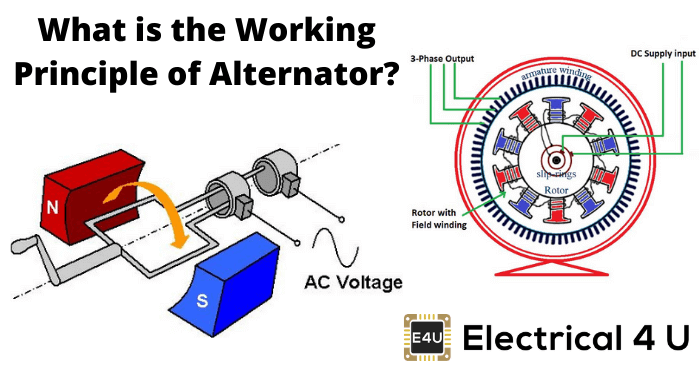 The working principle of an alternator is very simple. It is just like the basic principle of DC generator. It also depends upon Faraday’s law of electromagnetic induction which says the current is induced in the conductor inside a magnetic field when there is a relative motion between that conductor and the magnetic field. For understanding working of alternator let us think about a single rectangular turn placed in between two opposite magnetic poles as shown above. Now after clockwise rotation of another 90o the turn ABCD comes at the vertical position as shown below. At this position tangential motion of conductor AB and CD is just parallel to the magnetic flux lines, hence there will be no flux cutting that is no current in the conductor.

While the turn ABCD comes from a horizontal position to a vertical position, the angle between flux lines and direction of motion of conductor, reduces from 90o to 0o and consequently the induced current in the turn is reduced to zero from its maximum value. While the turn further proceeds to its vertical position the current is again reduced to zero. So if the turn continues to rotate the current in turn continually alternate its direction. During every full revolution of the turn, the current in turn gradually reaches to its maximum value then reduces to zero and then again it comes to its maximum value but in opposite direction and again it comes to zero. In this way, the current completes one full sine wave cycle during each 360o revolution of the turn. So, we have seen how alternating current is produced in a turn is rotated inside a magnetic field. From this, we will now come to the actual working principle of an alternator.

Now we place one stationary brush on each slip ring. If we connect two terminals of an external load with these two brushes, we will get an alternating current in the load. This is our elementary model of an alternator.

As a direct consequence of this flux cutting an induced emf and current starts to flow through the armature conductors which first flow in one direction for the first half cycle and then in the other direction for the second half cycle for each winding with a definite time lag of 120o due to the space displaced arrangement of 120o between them as shown in the figure below. This particular phenomenon results in three-phase power flow out of the alternator which is then transmitted to the distribution stations for domestic and industrial uses.