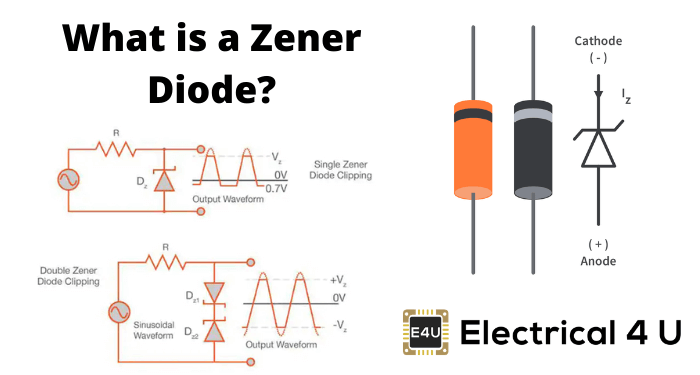 Due to this thinner depletion layer, voltage gradient or electric field strength across the depletion layer is quite high. If the reverse voltage is continued to increase, after a certain applied voltage, the electrons from the covalent bonds within the depletion region come out and make the depletion region conductive. This breakdown is called Zener breakdown. The voltage at which this breakdown occurs is called Zener voltage. If the applied reverse voltage across the diode is more than Zener voltage, the diode provides a conductive path to the current through it hence, there is no chance of further avalanche breakdown in it. Theoretically, Zener breakdown occurs at a lower voltage level then avalanche breakdown in a diode, especially doped for Zener breakdown. The Zener breakdown is much sharper than avalanche breakdown. The Zener voltage of the diode gets adjusted during manufacturing with the help of required and proper doping. When a zener diode is connected across a voltage source, and the source voltage is more than Zener voltage, the voltage across a Zener diode remain fixed irrespective of the source voltage. Although at that condition current through the diode can be of any value depending on the load connected with the diode. That is why we use a Zener diode mainly for controlling voltage in different circuits.

The circuit symbol of a Zener diode is also shown below. Characteristics of a Zener Diode

Now, discussing about the diode circuits we should look through the graphical representation of the operation of the zener diode. Normally, it is called the V-I characteristics of a Zener diode. The above diagram shows the V-I characteristics of a zener diode. When the diode is connected in forward bias, this diode acts as a normal diode but when the reverse bias voltage is greater than zener voltage, a sharp breakdown takes place. In the V-I characteristics above Vz is the zener voltage. It is also the knee voltage because at this point the current increases very rapidly.