This is because each of the free electron in n-type region is contributed by one neutral donor atom. Similarly when a hole is diffused from p-type region to n-type region, it leaves a negative accept or ion behind it in p-type region. 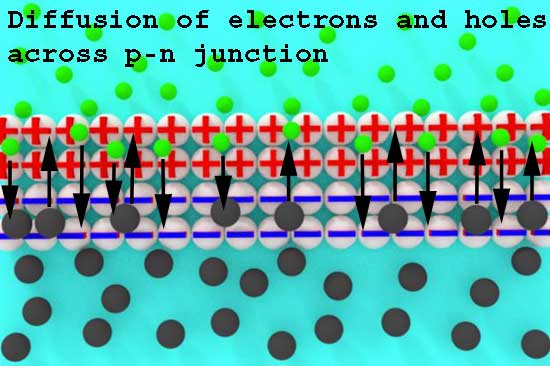 Now the n-type surface of the silicon crystal block is exposed to the sunlight. Some of the photons are absorbed by the silicon block. Some of the absorbed photon will have energy greater than the energy gap between valence and conduction band of valence electrons of the silicon atoms. Hence, some of the valence electrons in the covalent bond will be excited and jump out from the bond leaving behind a hole in the bond. In this way electron-hole pairs are generated in the crystal due to incident light. The holes of these light generated electron-hole pairs in the n-type side have enough probability of recombination with enormous electrons (majority carriers). Hence, solar cell is so designed, that the light- generated electrons or holes will not get enough chances to recombine with majority carriers.

The semiconductor (silicon) is so doped that the p-n junction forms in very close vicinity of exposed surface of the cell. If an electron hole pair is created within one minority carrier diffusion length, of the junction, the electrons of electron-hole pair will drift toward n-type region and hole of the pair will swept to p region due to in influence of electric field of the junction and hence on the average, it will contribute to current flow in an external circuit.