In radial feeder, the power flows in one direction only, which is from source to load. This type of feeders can easily be protected by using either definite time relays or inverse time relays.

This protection scheme is very simple. Here total line is divided into different sections and each section is provided with definite time relay. The relay nearest to the end of the line has minimum time setting while time setting of other relays successively increased, towards the source.
For example, suppose there is a source at point A, in the figure below The main advantage of this scheme is simplicity. The second major advantage is, during fault, only nearest CB towards the source from fault point will operate to isolate the specific position of the line.

If the number of sections in the line is quite large, the time setting of relay nearest to the source would be very long. So during any fault nearer to the source will take much time to be isolated. This may cause severe destructive effect on the system.

The drawback as we discussed just in definite time over current protection of transmission line, can easily be overcome by using inverse time relays. In inverse relay the time of operation is inversely proportional to fault current. 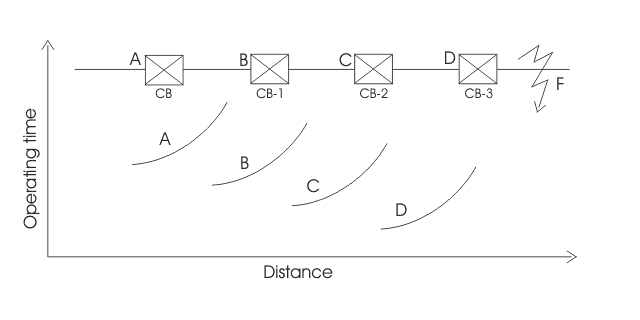 Over Current Protection of Parallel Feeders

For maintaining stability of the system it is required to feed a load from source by two or more than two feeders in parallel. If fault occurs in any of the feeders, only that faulty feeder should be isolated from the system in order to maintain continuity of supply from source to load. This requirement makes the protection of parallel feeders little bit more complex than simple non direction over current protection of line as in the case of radial feeders. The protection of parallel feeder requires to use directional relays and to grade the time setting of relay for selective tripping. 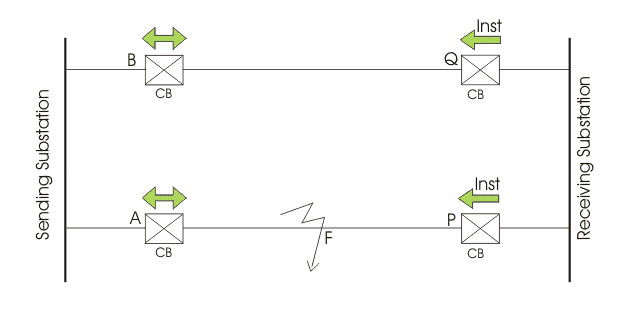 There are two feeders connected in parallel from source to load. Both of the feeders have non-directional over current relay at source end. These relays should be inverse time relay. Also both of the feeders have directional relay or reverse power relay at their load end. The reverse power relays used here should be instantaneous type. That means these relays should be operated as soon as flow of power in the feeder is reversed. The normal direction of power is from source to load.
Now, suppose a fault occurs at point F, say the fault current is If. This fault will get two parallel paths from source, one through circuit breaker A only and other via CB-B, feeder-2, CB-Q, load bus and CB-P. This is clearly shown in figure below, where IA and IB are current of fault shared by feeder-1 and feeder-2 respectively. 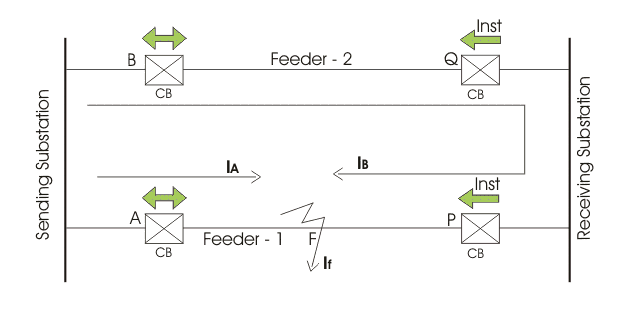 Now, IA is flowing through CB-A, IB is flowing through CB-P. As the direction of flow of CB-P is reversed it will trip instantly. But CB-Q will not trip as flow of current (power) in this circuit breaker is not reversed. As soon as CB-P is tripped, the fault current IB stops flowing through feeder and hence there is no question of further operating of inverse time over current relay. IA still continues to flow even CB-P is tripped. Then because of over current IA, CB-A will trip. In this way the faulty feeder is isolated from system.

This is simply a differential protection scheme applied to feeders. Several differential schemes are applied for protection of line but Mess Price Voltage balance system and Translay Scheme are most popularly used.

The working principle of Merz Price Balance system is quite simple. In this scheme of line protection, identical CT is connected to each of the both ends of the line. The polarity of the CTs is same. The secondary of these current transformer and operating coil of two instantaneous relays are formed a closed loop as shown in the figure below. In the loop pilot wire is used to connect both CT secondary and both relay coil as shown. 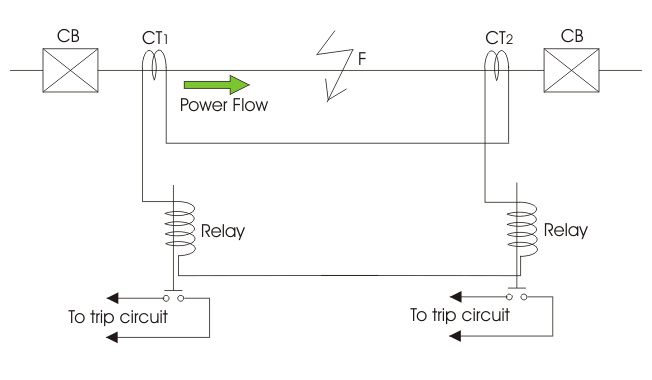