What is Maxwell Bridge

A Maxwell Inductance Capacitance Bridge (known as a Maxwell Bridge) is a modified version of a Wheatstone bridge which is used to measure the self-inductance of a circuit. A Maxwell bridge uses the null deflection method (also known as the “bridge method”) to calculate an unknown inductance in a circuit. When the calibrated components are a parallel capacitor and resistor, the bridge is known as a Maxwell-Wien bridge.

The working principle is that the positive phase angle of an inductive impedance can be compensated by the negative phase angle of a capacitive impedance when put in the opposite arm and the circuit is at resonance (i.e., no potential difference across the detector and hence no current flowing through it). The unknown inductance then becomes known in terms of this capacitance. An AC Bridge consists of a source, a balance detector and four arms. In AC bridges, all four arms contain an impedance. The AC bridges are formed by replacing the DC battery with an AC source and galvanometer by detector of Wheatstone bridge.

Now let us derive the general expression for an AC bridge balance. The figure below shows an AC bridge network: 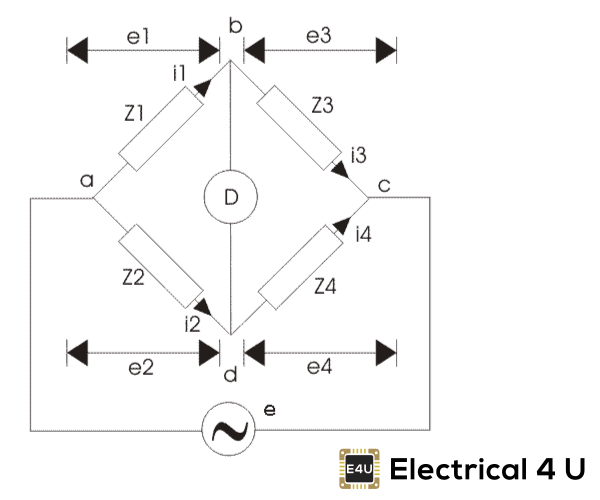 Now at the balance condition, the potential difference between b and d must be zero. From this, when the voltage drop from a to d equals to drop from a to b both in magnitude and phase.
Thus, we have from figure e1 = e2

Now consider the basic form of an AC bridge. Suppose we have bridge circuit as shown below, 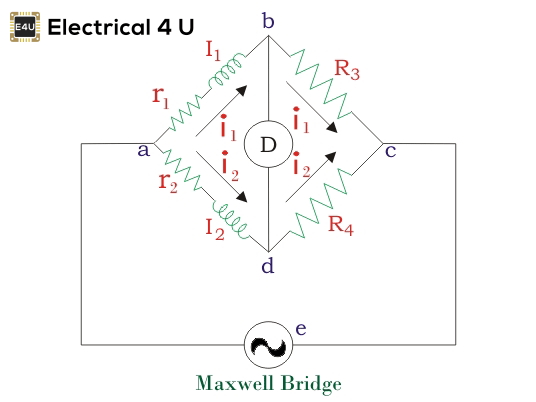 In this circuit R3 and R4 are pure electrical resistances. Putting the value of Z1, Z2, Z3 and Z4 in the equation that we have derived above for AC bridge.

Now equating the real and imaginary parts, we get:

Following are the important conclusions that can be drawn from the above equations:

There are two main types of Maxwell Bridges: In this bridge, the arms bc and cd are purely resistive while the phase balance depends on the arms ab and ad.
Here l1 = unknown inductor of r1.
l2 = variable inductor of resistance R2.
r2 = variable electrical resistance.
As we have discussed in AC bridge according to balance condition, we have at balance point:

In this Maxwell Bridge, the unknown inductor is measured by the standard variable capacitor.
Circuit of this bridge is given below,

Here, l1 is unknown inductance, C4 is a standard capacitor.
Now under balance conditions, we have from AC bridge that Z1.Z4 = Z2.Z3

Let us separate the real and imaginary parts, then we have,

Now the quality factor is given by,

The advantages of a Maxwell Bridge are:

The disadvantages of a Maxwell Bridge are:

The above all limitations are overcome by the modified bridge which is known as Hay’s bridge which does not use an electrical resistance in parallel with the capacitor.