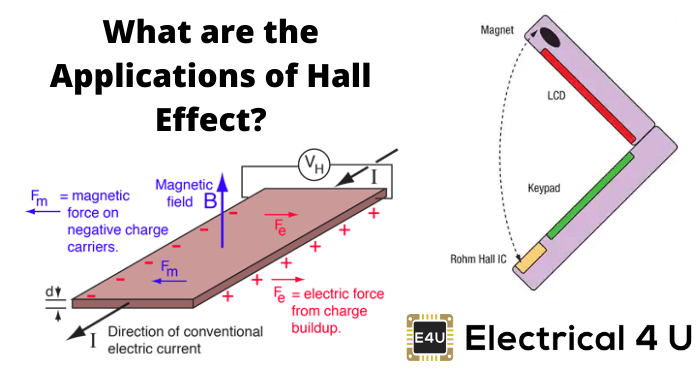 Let us take a block of metal as shown below. We show here it as transparent for better understanding. After applying a voltage across it current, “I” starts flowing from left to right that is along the x-direction. We place the metal block in a magnetic field of density “B”. The direction of the magnetic field along the y-axis. Now by Fleming’s Left-Hand Rule, the charge carriers will experience a force depending on both – direction of current and direction of magnetic field. As per Fleming’s rule, the conduction electrons will deflect towards the bottom of the block. As a result, there will be a change in concentration of electrons at upper and lower portion of the block. Consequently, a tiny potential difference appears across the block along the z-axis. The electric field created due to this shifting of electrons also opposes the shifting of electrons towards the surface of the metal block. Hence there may be two forces acting on the charge carriers.

These forces are opposite to each other. After the establishment of the certain electric field due to Hall effect the system becomes in equilibrium. At that condition the force acting on the charge carriers (conduction electrons) due to the established electric field and due to Hall effect become same, and opposite. Hence there would not be any further shifting of electrons towards the surface of the block and the system become in an equilibrium condition.
Let us concentrate on a single charge carrier moving through a conductor placed inside a magnetic field.
The charge of the charge carrier is e (say)
The magnetic flux density of the field is B (say).
Now we can write the magnetic force acting on the current carrying conductor of active length L and current I as

When the direction of B and I are perpendicular to each other.

We can rewrite the above equation as

Where V is the velocity of the charge passing through the conductor.

From the above equation, we can write the force acting on a single charge carrier as,

From equation 1 and 2, we can write

We call the term

Determine the Mobility (Hall Mobility)
Mobility expression for the electrons (μn) and the holes (μp), expressed in terms of Hall coefficient is given by,

Where, σn and σp represent the conductivity due to the electrons and the holes, respectively.

Further, there are many commercially available types of equipment based on the principle of Hall effect including Hall-effect sensors and Hall-effect probes.