What is Fluorescent Lamp? How does a Fluorescent Lamp work? 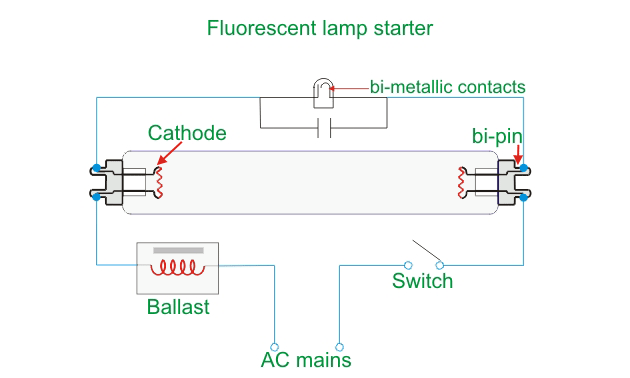 Here we connect one ballast, and one switch and the supply is series as shown. Then we connect the fluorescent tube and a starter across it.

Physics of behind Fluorescent Lamp

When a sufficiently high voltage is applied across the electrodes, a strong electric field is set up. A small amount of current through the electrodes filaments heats up the filament coil. As the filament is oxide coated, a sufficient amount of electrons is produced, and they rush from the negative electrode or cathode to the positive electrode or anode due to this strong electric field. During the movement of free electrons, the discharge process gets established.

In the discharge process, a single ultra violates spectral line of 253.7 nm is produced at a low pressure of mercury vapor. To generate 253.7 nm ultra violate ray the bulb temperature is kept between 105 to 115oF.
The length to diameter ratio of the tube should be such that fixed wattage loss happens at both ends. Where this wattage loss or glow of electrodes takes place is called cathode and anode fall region. This watt loss is very small.
Again the cathodes should be oxide coated. Hot cathode provides an abundance of free electrons. Hot cathodes, mean those electrodes which are heated by circulating current and this circulating current is provided by choke or control gear. Few lamps have cold cathode also. Cold cathodes have a larger effective area and higher voltage such as 11 kv is applied across them to get ions. Gas starts to be discharged due to this high voltage application. But at 100 to 200 V the cathode glow get separated from the cathode, it is called cathode fall. This provides a large supply of ions which are accelerated to the anode to produce secondary electrons on impact which in term produce more ions. But cathode-fall in hot cathode discharge is only at 10 V.