Zinc carbon battery is being popularly used during last 100 years. Generally there are two types of zinc carbon battery generally available – Leclanche battery and Zinc chloride battery. Both of these are primary battery. This battery was invented by Goerge Lionel Leclanche in 1866. This was the first battery in which low corrosive electrolyte like ammonium chloride was used. Before that only strong mineral acids were used as electrolyte of battery system.
In this battery cell, one glass jar was used as main container. The container was filled with ammonium chloride solution as electrolyte. An amalgamated zinc rod was immersed in this electrolyte as negative electrode or anode. In this Leclanche battery cell, a porous pot was filled with one to one mixture of manganese dioxide and carbon powder. A carbon rod was inserted into this mixture.

The porous pot along with the mixture and carbon rod served as positive electrode or cathode and this was placed in the ammonium chloride solution in the jar.In 1876, Leclanche himself improved his own prototype design of zinc carbon battery. Here he mixed a resin gum binder with manganese dioxide and carbon powder to form a compressed solid block of the mixture by hydraulic pressure. Due to this solid structure of cathode mixture, there is no further need of porous pot in Leclanche battery cell. In 1888, Dr. Carl Gassner, further developed the construction of Leclanche cell. Here he used a paste of plaster of Paris and ammonium chloride as electrolyte, instead of liquid ammonium chloride. Instead of inserting a zinc rod inside the electrolyte in glass container, he made the container by zinc itself. Hence this container also serves as anode of the battery. He minimized local chemical action in his battery by wrapping zinc chloride – ammonium chloride saturated cloths to the cylindrical cathode mix block.

Later he replaced plaster of Paris by wheat flour, in electrolyte mixture. This was the first commercial design of dry zinc carbon battery cell. This was not the end of journey. The Leclanche battery was further developed to meet its ongoing market demand in 20th century. Later acetylene black carbon was used as cathode current collector. This is more conductive than graphite. Development has also been done in separator design and venting seal system. 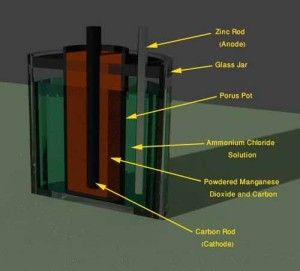 These electrons come to the cathode through external load circuit.
In Leclanche battery cell ammonium chloride (NH4Cl) exists in electrolyte mixture as NH4+ and Cl –. In cathode MnO2 will be reduced to Mn2O3 in reaction with ammonium ion (NH4+). In addition to Mn2O3 this reaction also produces ammonia (NH3) and water (H20).

But during this chemical process some of ammonium ions (NH4+ ) are directly reduced by electrons and form gaseous ammonia (NH3) and hydrogen(H2).

As we said earlier, there are two types of zinc carbon battery .

Types of Zinc Carbon Batteries according to Size

The advantages of Zinc carbon battery can be listed as below.