The electrical light source which works on the principle of incandescent phenomenon is called Incandescent Lamp. In other words, the lamp working due to glowing of the filament caused by electric current through it, is called incandescent lamp.

How do Incandescent Lamps Work?

The filament is attached across two lead wires. One lead wire is connected to the foot contact and other is terminated on the metallic base of the bulb. Both of the lead wires pass through glass support mounted at the lower middle of the bulb. Two support wires also attached to glass support, are used to support filament at its middle portion. The foot contact is isolated from metallic base by insulating materials. The entire system is encapsulated by a colored or phasphare coated or transparent glass bulb. The glass bulb may be filled with inert gases or it is kept vacuum depending upon rating of the incandescent lamp.

The glass bulb is either kept vacuum or filled with inert gases like argon with a small percentage of nitrogen at low pressure. Inert gases are used to minimize the evaporation of filament during service of the lamps. But due to convection flow of inert gas inside the bulb, there will be greater chances of losing the heat of filament during operation.

Again vacuum is a great insulation of heat, but it accelerates the evaporation of filament during operation. In the case of gas-filled incandescent lamps, 85% of argon mixed with 15% of nitrogen is used. Occasionally krypton can be used to reduce filament evaporation because the molecular weight of krypton gas is quite higher.

But it costs greater. At about 80% of atmospheric pressure, the gasses are filled into the bulb. Gas is filled in the bulb with the rating more than 40 W. But for less than 40 W bulb; there is no gas used.

The various parts of an incandescent lamp are shown below. 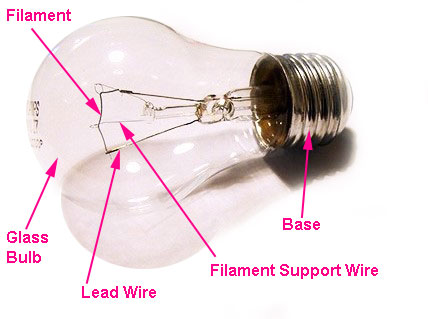 In present days, incandescent lamps are available in different wattage ratings such as 25, 40, 60, 75, 100 and 200 watts etc. There are different shapes of bulbs, but basically, all are rounded in shape. There are mainly three materials used for producing the filament of incandescent lamps, and these are carbon, tantalum, and tungsten. Carbon was previously used for filament material, but presently tungsten is used most for the purpose.

Although tungsten has the little bit poorer melting point than that of carbon but still tungsten is more preferable as filament material. This is because of high operating temperatures which makes tungsten much luminous efficient. The mechanical strength of tungsten filament is quite high to withstand mechanical vibrations.

Whatever may be the technology of manufacturing, each type of incandescent lamps has some approximate life span. This is because of filament evaporation phenomenon which can be minimized but can not be avoided completely.

It is found that luminous efficacy of an incandescent lamp is directly proportional to the square of supply voltage but at the same time, the life span of the lamp is inversely proportional to 13th to 14th power of supply voltage. The main advantages of incandescent lamps are that these are cheap enough and very suitable for lighting at small areas. But these lamps are not energy efficient and about 90% of input electrical energy is lost as heat.

Availability of the Incandescent Bulbs in the Market

There are various attractive shapes and sizes of the bulbs available in the market. PS30 lamps have a pear shape, T12 bulb is tubular with diameter 1.5 inch, R40 bulb is with reflector bulb envelope with a diameter of 5 inches. Based on availability of wattage the bulbs are common in the market with 25, 40, 60, 75, 100, 150 and 200W etc. We can follow the table below to get important data about the incandescent lamp.