There are mainly two parts in a lead acid battery. The container and plates.

As this battery container mainly contains sulfuric acid hence the materials used for making a lead acid battery container must be resistant to sulfuric acid. The material container should also be free from those impurities which are deterious to the sulfuric acid. Especially iron and manganese are intolerable.
The glass, lead lined wood, ebonite, hard rubber of bituminous compound, ceramic materials and molded plastics are having the above mentioned properties, hence the container of lead acid battery is made of either of those materials. The container is tightly sealed with top cover.
The top cover has three holes, one at each end for the posts and one in the middle for vent plug and through which the electrolyte is poured and gases escape out. 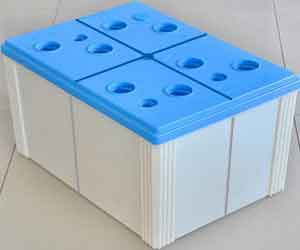 There are, in general, two methods of producing the active materials of the cell and attaching them to lead plates. These are known after the names of their inventors.

In this process two sheets of lead are taken and immersed in dilute H2SO4. When an current is passed into this lead acid cell from an external supply, then due to electrolysis, hydrogen and oxygen are evolved. At anode, oxygen attacks lead converting it into PbO2 whereas cathode is unaffected because hydrogen can form no compound with Pb.

If the cell is now discharged then peroxide-coated plate becomes cathode, so hydrogen forms on it and combines with the oxygen of PbO2 to form water thus,

At the same time, oxygen goes to anode which is lead and reacts to form PbO2. Hence the anode becomes covered with a thin film of PbO2.

By continuous reversal of the current or by charging and discharging, the thin film of PbO2 will become thicker and thicker and the cell polarity will take increasingly longer time to reverse. Two lead plates after being subjected to hundreds of reversals will acquire a skin of lead peroxide thick enough to process sufficiently high capacity. This process of making positive plates is known as formation. The negative lead acid battery plates are made by same process. It is seen that since active material on a Plante plate consists of a thin layer of PbO2 formed on and from the surface of the lead plate, it must be desirable to have a large superficial area in order to get an appreciable volume of it. The superficial area of lead acid battery plate can be increased by grooving or laminating. The figure shows a Plante positive plate which consists of a pure lead grid with finely laminated surfaces. The construction of these plates consists of a large number of thin vertical lamination which are strengthened at intervals by horizontal binding ribs. This results in increase of superficial area by a large extend. The main feature of construction of lead acid battery is to accommodate a large volume of active materials i.e. PbO2 in active plate.
Positive plates are usually produced by Plante Process and the plates are known as Plante Plates. The negative lead acid battery plates can also be manufactured by this process but for negative plate this process is impracticable.

In Faure process, the active material is mechanically applied instead of being electrolytically developed out of lead plate itself as in Plante process. The active material which is in the form of red lead (Pb3O4) or litharge (PbO) or the mixture of two in various proportions, is pressed into the interstices of a thin lead grid which also serves as conductor of current. After pasting the grids with active material the plates are dried, hardened and assembled in a weak solution of sulfuric acid of specific gravity 1.1 to 1.2 and are formed by passing a current between them. For forming negative plate these plates are connected as cathodes. The oxygen evolved at the anode converts the lead oxide (Pb3O4) into lead peroxide (PbO2) and hydrogen evolved at cathode reduces the lead monoxide (PbO) into sponge lead (Pb). Formation of positive plates involves conversion of lead oxide into lead peroxide. A high lead oxide, such as Pb3O4 is used from economic considerations both in current and time, although in practice a mixture of Pb3O4 is employed. Faure process is much suitable for manufacturing of negative Faure plates rather than positive lead acid battery plates.