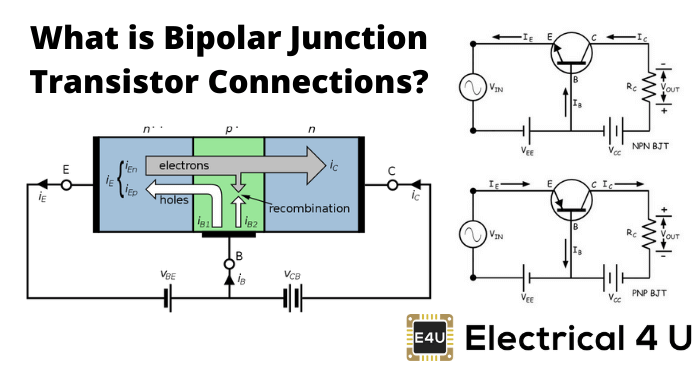 Common Base Connection of BJT

Here the base terminal is common to both input and output circuit. The common base configurations or modes are as shown in the figure below. Here, the common base mode of npn transistor and pnp transistor are shown separately. Here the input current is emitter current IE and output current is collector current IC. The current gain is considered as when we only consider the dc biasing voltages of the circuit and no alternating signal is applied in the input.

Now if we consider the alternating signal applied to the input then the current amplification factor (α) at a constant collector-base voltage, would be

This expression proves that collector current also depends on base current.

Characteristic of Common Base Connection Hence input resistance of the circuit is higher than that of the common base mode of a transistor. The output resistance would be The ratio of change of emitter current to change of base current is defined as the current gain of common collector configuration. This is denoted as,

The current amplification factor of the circuit is the ratio of change of emitter current to change of base current when a time-varying signal is applied to the input.