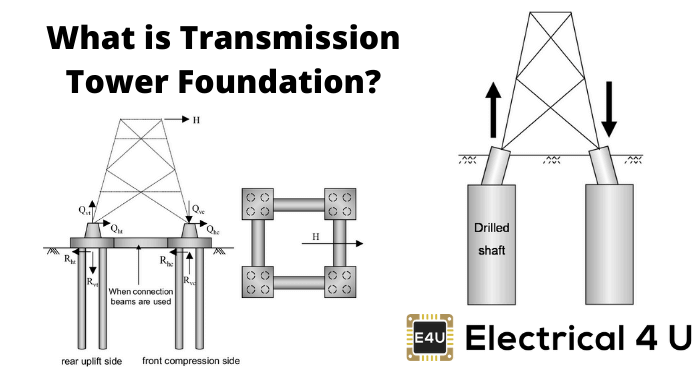 Foundation of any structure plays an important role in safety and satisfactory performance of the structure as it transmits mechanical loads of the electrical transmission system to earth. A transmission structure Without having a sound and safe foundation, it cannot perform the functions for which it has been designed. The foundations in various types of soils have to be designed to suit the soil conditions of particular type.
In addition to foundations of normal towers, there are situations where considering techno-economical aspect for special towers required or river crossing which may be located either on the bank of the river or in the mind stream or both, pile foundation may be provided.

Type of Loads on Foundation

The foundation of towers are normally subjected to three types of forces. These are:

The magnitude or limit loads for foundations should be taken 10% higher than these for the corresponding towers.
The base slab of the foundation shall be designed for additional moments developing due to eccentricity of the loads. Soil parameters For designing the foundations, following parameters are required.

The above values are available from soil test report.

In addition to the strength design, stability analysis of the foundation shall be done to check the possibility of failure by over turning, uprooting of stubs, sliding and tilting of foundation etc. The following primary type of soil resistance shall be assumed to act in resisting the loads imposed on the footing in earth.

The uplift loads shall be assumed to be resisted by the weight of earth in an inverted frustum of a pyramid of earth whose sides make an angle equal to the angle of report of the earth with the vertical in average soil. The volume of earth computation shall be as per enclosed drawing (Fig.3) The weight of concrete embedded in earth and that above the ground level shall also be considered for resisting the uplift. In case where the frustum of earth pyramid of two adjoining legs overlaps each other, the earth frustum shall be assumed truncated by a vertical plane passing through the center line of the tower base. Over load factor (OLF) of 10% (Ten percent) shall be considered over the design load i.e. OLF = 1.10 for suspension tower and 1.15 for angle including dead end and anchor tower. However, for special tower OLF shall be 1.20.

Resistance Against Down Thrust of Transmission Tower Foundation

The following load combinations shall be resisted by the bearing strength of the soil:

Resistance Against Side Thrust of Transmission Tower Foundation

The chimney shall be designed as per limit state method for the combined action of axial forces, tension and compression and the associated maximum bending moment. In these calculations, the tensile strength of concrete shall be ignored.

Resistance Against Uprooting of Stub of Transmission Tower Foundation

OLF of 10% (Ten percent) shall be considered i.e. OLF = 1.10 for normal suspension towers and 1.15 for angle tower including Dead end/anchor tower. For special towers OLF shall be 1.20.