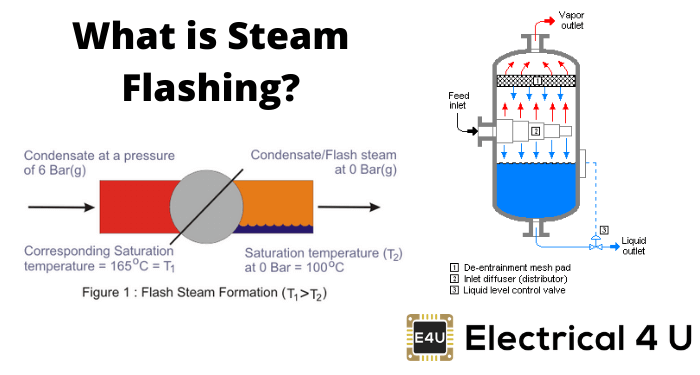 Whether Flash Steam is a Different Steam ?

Flash steam is similar to any other normal steam, but its name is given on the basis of how it is produced.

How the Generation of Flash Steam is Different from Normal Steam?

Flash steam is produced/generated, when a high pressure condensate before the steam trap is exposed to a large pressure drop during its exit.

Flash steam generation is an automatic phenomenon depending upon the condensate parameters (system parameters). Do not depend upon the primary or secondary source of fuel.

Flashing of Steam
It is the Excess energy or enthalpy available (due to fall in pressure) will flashes/evaporate some portion of the water/condensate when pressure falls.
Amount of Flash steam produced is given by the formula:
hf at 6 bar = 697.22 kJ/Kg
hf at 0 bar = 417.5 kJ/Kg
hfg at 0 bar = 2258 kJ/Kg

Therefore from the above table:

Thus at the exit point or lower pressure, total enthalpy in water ( condensate) and steam is A + B = 697.1

Following are the areas where Flash steam effect should be given due consideration other it may lead to water hammer: